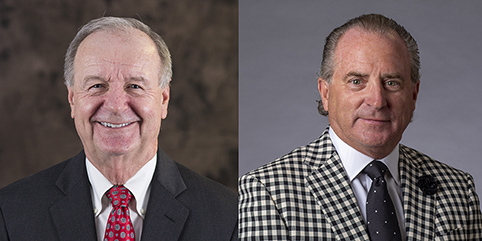 The Business Solutions Association (BSA) has selected Barry Lane (pictured on the right) as the recipient of its 2022 Leadership Award and named James Fellowes as the 2022 Legend of the Industry.

Fellowes began working in the family business while in high school in 1964, became a full-time employee in 1969, and devoted his entire career to Fellowes Inc. He was motivated to join the company by the business ethic established by his grandfather, Harry Fellowes, and then refined by his father and uncle. James served in various management positions at Fellowes, leading to president in 1983 and later CEO in 1997. He became non-executive chairman of the board in 2014. His son John joined the business as the fourth generation in 2001 and became CEO in 2014.

“BSA is indeed pleased to honor James ‘Jamie’ Fellowes as the 2022 Legend of the Industry,” said BSA president Travis Kaste of 3M Corporation. “Jamie Fellowes is truly an icon in our industry, where he has worked for five decades.”

In 2013, Fellowes received the BSA Leadership Award. He was the recipient of the City of Hope Spirit of Life Award in 1997 and the Lifetime Industry Achievement Award from Office Products International in 2012. He was honored with the Torch of Liberty Award from the Anti-Defamation League in 1994; and the UJA Foundation honored him in 2002 with the Richard Karasik Humanitarian Award.

Barry Lane began his career in the commercial office products industry in 1978 and joined Avery in 1982, where he has remained for the past 44 years. He has held various sales leadership roles in the commercial, superstore and retail channels throughout North America and is currently Avery’s VP of commercial sales.

Lane has devoted time and energy to building strong customer relationships, promoting manufacturer peer group exchanges and supporting the industry’s charitable efforts. He has always been actively involved in the industry and has participated in many trade associations, particularly BSA and AOPD.

From 2016-2019, Lane was president of BSA, having previously been VP and a board member. He also served on the AOPD advisory board from 2013-2019 and is a member of a variety of different customer supplier councils. In 2015, he was the recipient of the prestigious City of Hope Hall of Fame Award.

“Barry Lane has made an outstanding contribution to our industry. He has inspired and mentored many people over the years by setting the industry standard for managing and maintaining excellent customer relationships,” said BSA president Travis Kaste.

Both Fellowes and Lane will receive their awards at the Industry Awards Luncheon on November 10 during Industry Week, which takes place 6-11 in Las Vegas, Nevada.