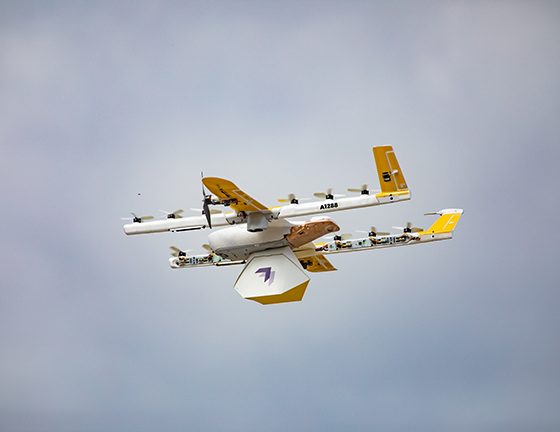 The use of drones in last mile deliveries is a tantalizing prospect, but is it all pie in the sky? OPI’s Michelle Sturman finds out…

Unmanned aerial vehicles (UAV) or unmanned aerial systems (UAS), better known as drones, are already used in the military, medical, agriculture, construction and media sectors, but their application for last mile deliveries is still in its infancy. However, some of the world’s biggest tech, logistics and retail firms are running trials now.

The widespread adoption of drone deliveries could provide many benefits for businesses, especially in what is often considered shipping’s Achilles’ heel – the last mile.

UAS shipments are typically made in under 30 minutes; are generally operationally cheaper to run than other modes of transport; and can overcome issues such as traffic jams. A narrower delivery window also potentially reduces the number of missed drops.

The Potential for Advanced Air Mobility Beyond the Congestion Use Case research, undertaken by strategy firm LEK Consultancy, suggests UAVs could capture around one-third of the B2B express/same-day delivery market within 15-20 years.

Drones offer a more environmentally friendly transportation option too. A report by Virginia Tech, Measuring the Effects of Drone Delivery in the United States, modelled the impact on three metropolitan areas within five years of launch. The research showed that, by year five, in a single metropolitan area, deliveries by drone could save almost 300 million miles in road travel and eliminate up to 113,900 tons of CO2 per year.

They could also generate up to $208,000 in new annual sales for a participating retail business. Gartner predicts that, in 2026, over one million drones will carry out retail deliveries, rising from just 20,000 in 2020.

In terms of drone package deliveries, the figures differ considerably. Research firm Facts & Factors, for instance, expects the sector to reach $6 billion by 2026. The Drone Package Delivery Market report by MarketsandMarkets puts a value of $39 billion by 2030, whereas the Global Drone Delivery Market – Analysis and Forecast 2023-2030 by BIS Research suggests the figure will merely be around $5 billion by this time.

Meanwhile, research firm IDTechEx in its Drone Market and Industries 2021-2041 report, expects the drone delivery industry to only reach around $5 billion by 2041.

Whatever the market value, there are many hurdles to overcome – the biggest of which is regulation – before we see the skies above us buzzing with parcel-carrying UAVs.

As it stands, few countries have approved commercial drone delivery activity. However, this is expected to change sooner rather than later as there are at present several pilots underway across the US, Australia and Europe (read Trials and Tribulations below).

UAS delivery applications in cities pose problems for the safe drop-off of packages due to urban densities and the propensity for living in apartments – even those with balconies. One solution for landing difficulties could be to drop shipments at a centrally located locker featuring an integrated “parcel retrieval mechanism” (for more information, read ‘Last-mile Delivery Concepts: A Survey from an Operational Research Perspective’ by Nils Boysen et al).

Drones are required to fly at low levels to bypass other air traffic, which causes its own set of issues because they need to navigate obstacles such as power lines, cell towers, trees, and multistorey buildings, as well as avoid no-fly zones. They are also subject to inclement weather conditions that could halt deliveries for lengthy periods.

Currently, drones have flight duration limitations and are therefore only suitable for relatively short distance trips, with the capacity to deliver one small, lightweight parcel at a time.

One possible solution is to build more distribution centers closer to areas where UAV delivery is anticipated. This, however, may conflict with a host of other issues such as sustainability, land use and escalating costs related to erecting more warehouses, thereby negating any benefits from operating a drone fleet. Another alternative is the establishment of landing zones on existing buildings or surrounding land for clients.

Although Amazon has gone exceedingly quiet over its Prime Air concept (a 2021 report, ‘The Slow Collapse of Amazon’s Drone Delivery Dream’ in Wired magazine is well worth a read), its patent for an airborne fulfilment center (AFC) is intriguing. Amazon suggested the AFC could be an airship that would deploy drones to deliver ordered items to user-designated delivery locations (to read the full patent, visit https://patents.google.com/patent/US9305280B1/en).

The online giant also has a patent for vertical multilevel fulfilment centers designed for cities. Shaped like a beehive or cylindrical tower, it provides drone accommodation and space for self-service parcel pickup and delivery vehicles (https://patents.google.com/patent/US20170175413A1/en).

Even if regulatory and technical issues are overcome, the technology has to be adopted by consumers. In the US, for example, fears surrounding cybersecurity, the potential for hijacking drones, receiving damaged goods or having parcels stolen makes online shoppers anxious, according to market insight firm Clutch.

Many studies have further highlighted the problem of noise pollution resulting from drone-filled skies. An often-cited NASA study from 2017, for instance, revealed that test subjects found the noise of UAVs to be more annoying than road vehicles. There have also been concerns related to the impact on wildlife, especially birds.

Highly unlikely to ever completely replace other transportation methods, there seems to be a case for integrating drones as a complementary part of future last mile delivery services.

Indeed, McKinsey expects close to 1.5 million parcels to be delivered by UAVs this year – without blanket regulatory approval. The research firm believes that, while progress has been substantial, three catalysts will determine the trajectory of the drone delivery sector going forward: regulation, widespread acceptance and cost. If these criteria are satisfied, the sky’s the limit.

Operating in Galway, Ireland, Manna has already completed over 65,000 drone flights, delivering parcels in under three minutes on average. Customers order through an app, Manna picks up the parcel from the store, and the aviation-grade, fully autonomous drone delivers it to the designated address and lowers the package on flat and inanimate ground via a biodegradable thread.

Watch or listen to an interview with Manna CEO Bobby Healy – TechFirst with John Koetsier – Drone Delivery is Here. Right Now. For Real. And it’s Awesome

Walmart is trialling several drone delivery systems, including Zipline for on-demand shipments of select health and wellness products in the US. Zipline will operate from a Walmart store, servicing a 50-mile radius and delivering goods in under an hour.

Walmart also partnered with DroneUp in 2020 to trial at-home drop-offs of COVID-19 self-collection kits. Now, after completing hundreds of drone deliveries, the retailer has invested in DroneUp and recently announced the first commercial multisite operations from three drone ‘hubs’ located at Walmart stores in Arkansas.

Operational in Australia, Finland and the US, Alphabet’s Wing is flying high, having performed 140,000 deliveries to customers in 2021 – a 600% increase over 2020. Last year, it built the world’s first rooftop drone distribution nest in Queensland, Australia, and has just announced a deal with Coles, one of the country’s largest supermarket chains, formerly part of the Wesfarmers stable.

In the US, the company is preparing to launch its first major metropolitan area drone delivery service in Dallas, Texas. A deal with Walgreens will see Wing at retail locations, with each store deploying a dedicated fleet from its parking lot, roof or small spaces adjacent to the building.